Westminster, Maryland • June 24, 2013
Baltimore, MD. June 20, 2013. NoWorriesIT, a technology and computer support company, was presented with the Extraordinary Achievement Award by the Maryland Recycling Network during their Annual Conference at the Maritime Institute in Linthicum on Thursday, June 20, 2013.
The Extraordinary Achievement Award recognizes programs that have contributed to recycling in Maryland through creativity, resourcefulness, ingenuity, and determination, among other means. Other business or organizational awards categories included Outstanding Corporate Leadership, Outstanding Government Leadership, Outstanding Small Government Program, Outstanding Environmental and Community Leadership, and Best Market Development Program.
Stemming from a concern for data security and the environment, as well as a desire to give back to the community, these core values became the foundation of the NoWorriesIT Recycling Computers for Charity program. The bi-annual computer collection drives began in 2010 and provided a resource for businesses and individuals to donate old, non-working computers, rather than resorting to the landfills. During the month-long public drives, NoWorriesIT sanitizes the da 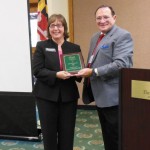 ta from all computers (free of charge), and transports equipment to a local recycling center for a cash rebate. NoWorriesIT then matches the cash rebate and donates the total to one of two local non-profits. The next month-long Recycling Computers for Charity drive will begin on August 15th.
For information about NoWorriesIT’s small business computer services or the recycling program, contact www.noworriesit.net or call 410-751-7650.

Congratulations to our friends at Springdale Preparatory School and their middle school Robotics team, which placed 2nd…

September, 2018 Connection Ubuntu seeks to supply both donated and purchased laptops and tablets to…