First a little background- In 2003, the owners of a local cable company were looking for a way to give back to the Carroll County community.  They did so by donating a building which has since become a community staple in the form of the Carroll Nonprofit Center.  The Carroll Nonprofit Center is a collaboration of 26 nonprofit agencies who provide services to the community free of charge.  Since the doors opened in February 2006, the Nonprofit Center has covered 100% of the operating expenses that are solely funded by the privately family funded foundation known as the Anverse Foundation.

Since the doors to the Carroll Nonprofit Center opened over 10 years ago, they have provided over $6.7 Million Dollars in in-kind donations to those of us who call the Nonprofit Center  home.  It is a place where we work, collaborate, educate and help others.  The state value of a volunteer hour is $26.41 per hour, so when you calculate the volunteer hours of 148,251 hours that the Volunteers of the various organizations housed at the CNC that equates to over $3.9 million dollars.  But most importantly, it is the families that the Nonprofit Center is able to serve… that number exceeds 56K families who have walked through the front door of the CNC for the first time during their time of need!

Recently, the for-profit company that is the parent company of Anverse- Reicon Management, LLC donated computers for our TechKids/TechWorks program that were delivered from Georgia where Anverse, Inc and Reicon Management are based.  Did you hear me… I said Georgia!

The financial benefit that the Carroll Technology Council has received as a result of calling the NPC home amounts to over $150,000 of in kind donated rent- due to the kindness and generosity of the Anverse Foundation.  That makes them one of the biggest financial supports of the CTC, and we’ve never recognized them for that generosity.

So tonight we are… In appreciation for what they have done not only for the Carroll Technology Council, but also for the 39 other nonprofits who have called the Carroll Nonprofit Center home over the past 10 years.

This year’s Community Partner of the Year is the Anverse Foundation… the parent company of the Carroll Nonprofit Center.

When the City of Westminster pursued plans for the Westminster Fiber Network, they partnered with Ting, a Tucows Company – in 2015 to provide gigabyte internet to the businesses and residents who reside within the City Limits of Westminster.

For those of you who have been living under a rock for the last year, here’s some background – “The City will fund, own, and maintain the fiber; Ting will lease the fiber and provide all equipment and services. Ting will pay the City to use the fiber—reducing the City’s risk while enabling Ting to offer Gigabit Internet in Westminster without having to build a fiber network from scratch.  Most importantly, the people of Westminster, Maryland will join the ranks of Seoul, Hong Kong, Tokyo, Chattanooga and, soon, Charlottesville, Virginia with blazing fast, video streaming, photo uploading, economy driving, job creating Internet to boast and enjoy.” I didn’t write that, rather found the quote from a newspaper publishing on the internet… Is that accurate Val?  I guess you can trust some things on the internet!

Shortly thereafter in the late spring of 2015 Valerie Giovagnoni took on the roll as the City Manager of Ting.   Val and TING have covered a LOT of ground in the short time that have called Westminster home. In addition to opening an office, marketing the fiber project, lighting phase one of the project and moving into phase 2, they have sponsored numerous events like the Carroll Biz Challenge, Downtown Main Street events, Fallfest and the Tech Stroll and I’m sure many others that I’m missing.

In May 2016, they opened the Ting MakerSpace which eventually will become a part of a future MakerSpace at the Westminster Branch of the Carroll County Public Library.  While this space isn’t “officially open”, it has been used for meetings and has hosted several community STEM events that have brought together students from CCPS, CCC and McDaniel who have utilized the crazy fast fiber internet that Ting provides.

How does this relate to the CTC?  Ting joined the CTC in July 2015 and since that time has sponsored numerous CTC Events including happy hours, last year’s Technically Speaking, and were a Sustaining Sponsor of the CTC this year.   They sponsored the Inaugural Tech Stroll in September in Westminster, which was a wonderful opportunity for local businesses to come together and highlight all of the cool technology taking place in Carroll County, but specifically in Downtown Westminster!   Additionally, Valerie has served as the CTC’s 2016 vice chair person and had a huge hand in tonight’s Technically Speaking serving as the committee chair and organized our wine auction.

We have recognized our other internet service providers over the past 2 years at Technically Speaking for what they are doing to utilize Carroll County’s amazing and unique fiber infrastructure and how that is helping to highlight Carroll County as a great place to bring your family and businesses.

This year, the Carroll Technology Council is recognizing TING as the 2016 Tech Company of the year for their efforts in helping to showcase Westminster as a tech saavy community and for all of the support that they have given to the CTC over the past year.

In my opinion (and the opinion of others as well), this award is long overdue to the recipient, and to say that I was shocked when I found out that they had not yet received it, is an understatement.

Denise Beaver has been a part of the Carroll Technology Council since its inception, and with the exception of a very few, and I do mean few; she may very well be its biggest cheerleader.

Professionally, Denise serves as the Deputy Director of Carroll County Economic Development and before then was across the street at the Carroll County Business Education Resource Center.  She’s been employed with the County for over 20 years and needless to say, she has seen some major changes in Carroll County through her tenure.

Denise has served as the representative of the County on our Board of Directors in the role of Secretary since day one. (She’s looking for volunteers to take over that role… Any takers?) Over the years, she’s hosted and produced Technically Speaking radio spots on WTTR, and television shows with the Community Media Center.  She’s served on nearly every committee that the CTC’s had and most recently advocated for the manufactures of Carroll County in her IGNITE Carroll 5 presentation just last month at the Carroll Arts Center.

She is a consistent advocate for the Tech Council making sure that our members and/or the organization as a whole are aware of both personal and professional opportunities on the County and State levels.  She’s on a first name basis with at least one representative of nearly every business in Carroll County regardless of the size or tax base income of the business.  THAT says something!

She is the first to offer assistance and innovative ideas when it comes to event planning or hosting an event.   She attends nearly every CTC event and advocates for funding from the County and State for the Tech Council, as well as for countless opportunities for us to be the “go to technology resource in the County”.

On a personal note, aside from Gary Ditto, Denise was the first person who I met when I came on board with the Tech Council.  My first day as an employee was a snowy Monday in February 2014.  The County decided to close their offices at noon, but Denise stayed with me at the CTC office showing me what I needed to know and preparing me for the roll that I had eagerly jumped into. She met with me daily for nearly a week… no one else in my entire professional career has done that.

Ever since that day, she’s been a voice of guidance, support, encouragement, and advocate for me, my ideas, my successes and even my failures.  More often than not, she’s also my voice of reason and confidant.

But me aside, she’s always been that for the Tech Council since day one…and that is why she’s this year’s Carroll Tech Council Techie of the Year. 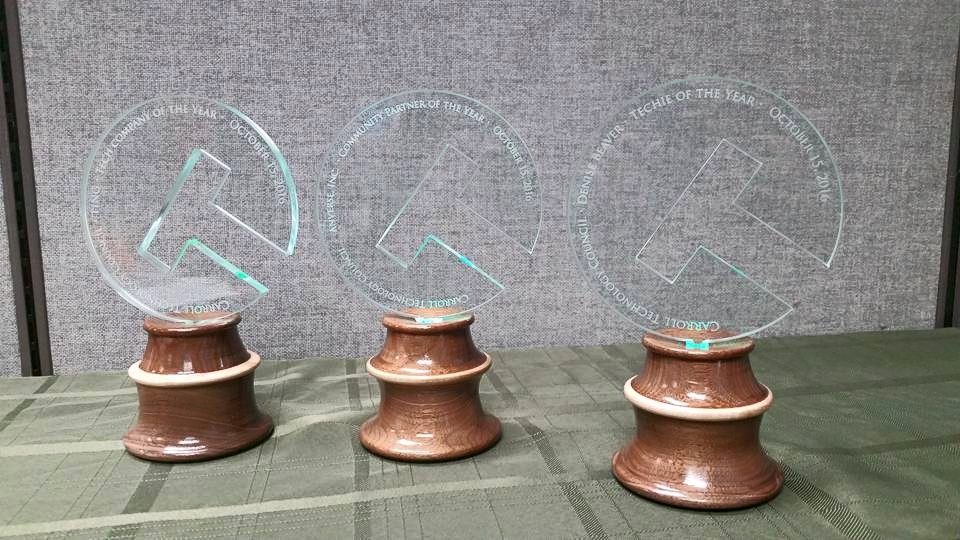 November, 2018 On September 26, 2018 we carried on the IGNITE Carroll tradition, hearing from…

IGNITE Carroll 7 is just weeks away, and we could not be more excited! This…